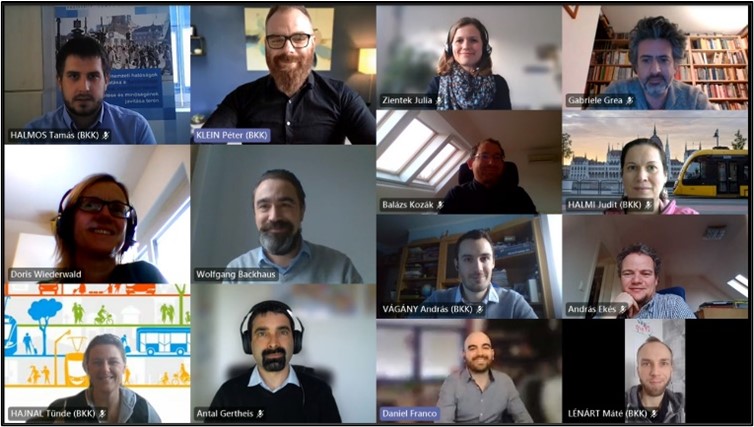 Assessing planning and implementation framework towards MaaS in Budapest

A Diagnosis Workshop was held in January 2021 for the city of Budapest, under the Dynaxibility4CE project. As a key element of the project’s workplan, these workshops aim to analyse current situation in each city and the surrounding commuter zone, the so-called ‘functional urban area’ (FUA). Thus, this assessment is the basis for action planning towards implementation of low-carbon mobility solutions. Also, it is meant to assess planning needs and knowledge gaps to guide development of tools low-carbon mobility planning in FUAs.

In the case of Budapest, the workshop focused the analysis of current context, challenges, and opportunities for MaaS implementation. Furthermore, scenarios towards MaaS deployment were evaluated, identifying potential obstacles and discussing key questions to be resolved. 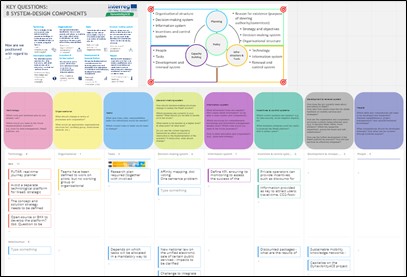 The event counted with the participation of several representatives from the Centre for Budapest Transport (BKK). The workshop was led and prepared by Rupprecht Consult, putting in practice change management and cooperative planning concepts. Also, key partners participated in the discussion, including Mobilissimus, as WP leader and local support partner, and Redmint, leading Dynaxibility’s MaaS thematic focus. Setting the conceptual framework for the discussion, AustriaTech provided an overview of key elements of MaaS implementation, while the City of Graz shared their experience with the establishment of a MaaS Platform.

This was followed by an interactive session, where partners analysed various components of the mobility system, identifying key success factors and changes required on current situation, to effectively prepare MaaS implementation in the city. 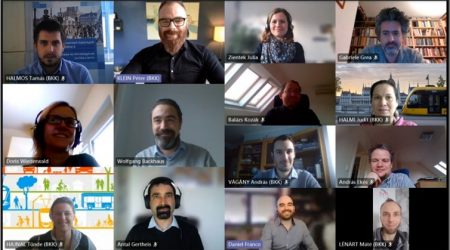 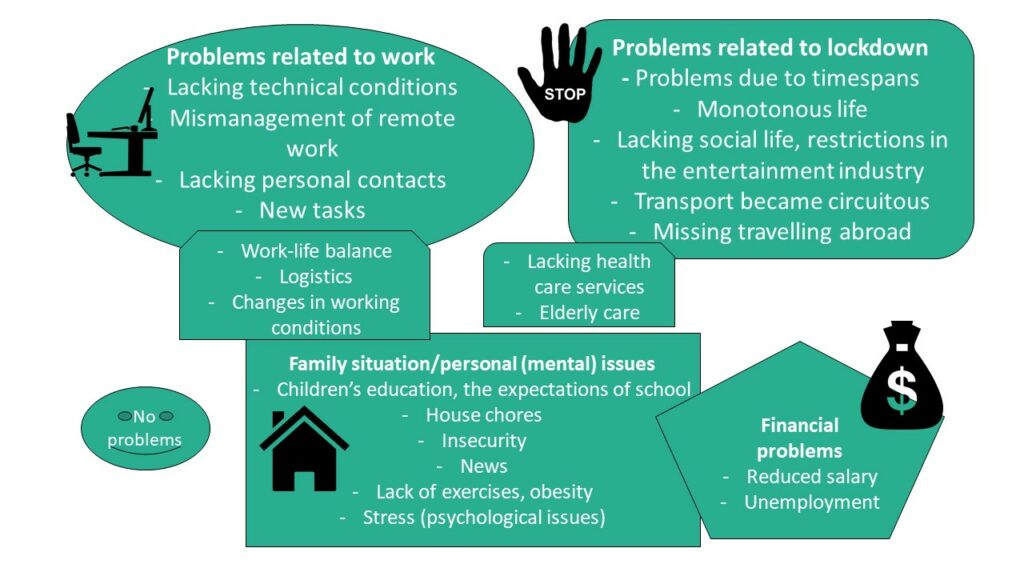 Difficulties and advantages of the lockdown – as seen by the employees

The COVID-19 pandemic hit us all, but everyone reacted to it differently. Within the SASMOB project Mobilissimus and the Faculty of Economics at the University of Szeged conducted a research to learn about the employees’ experiences focusing on those who had the possibility to work (at least partially) from home. The results show that telework – under normal circumstances – could be beneficial not only to the environment but to the individuals as well.

Companies in Szeged reacted fast to the pandemic situation and subsequent lockdown. In a previous article we reported about the introduction of working from home from the employers’ point of view. Now we focus on the personal experiences of the employees. The research was carried out in two phases: first we conducted focus groups with heterogenous groups and based on the result, we created and sent out a survey to each partner employer which was filled in by 10 percent of all the employees. The results are based on both phases.

The lockdown period was full of challenges and each of us reacted to it differently. Difficulties and challenges covered a wide spectrum and can be categorized into four groups, such as problems related to work, problems related to lockdown, difficulties due to the family situation and personal wellbeing and financial issues. There were overlaps as well: between work-related problems and family, such as for example work-life balance; and when lockdown-related problems were mixed with personal issues. (There were also some people according to whom there were no difficulties.) An example for the lack of work-life balance from someone who lives with her partner (with no children): „I am working the whole day and I am not working the whole day: I deal with other things.” There were some whose days also became fuzzy but were not bothered by this mess because their life is always like this anyway. Those who prefer to separate work from family and private life suffered because there was not enough space for them, but the house chores and the children also played a big role in their frustration. A father said “the householding tasks distracted me from my work” meaning that he helped (or had to help) his wife. However, this was not always the case. The gender roles differed a lot. An example from another father with bigger kids emphasized that the moment his wife started working from home, he started going to the office because “The goal was not to be at home at the same time. Many memes were about ‘how good, we are together, we can talk more’ but I rather decreased this amount of time”. This shows the duality of being quarantined: some looked at it as an opportunity while for some others it was a burden. And some simply missed their daily routine. The conflicting roles (work versus householding/babysitting) were emphasized throughout the focus groups.

Figure 1: Difficulties and challenges of the quarantine

On the other hand, there were advantages of these critical times as well which is summarized on Figure 2. It is visible that there were less things mentioned here, but similarly to the previous one, there were four big categories: transport, family/home, financial aspects and the change in lifestyle. The most frequently mentioned advantage was the time won by not commuting. This covers several aspects, such as reduced traffic, more free time, slowing down (not having to rush in the mornings) and even reduced costs (due to not using the car for work). These are some of the benefits the SASMob project aims to achieve by promoting telework. However, not having the morning preparatory time, some complained: “There was no rush, no morning traffic but our life became fuzzy”. The free time was not only related to one’s own “me-time”, but some fathers were happy to spend more time with their kids by having to take care of them more often. One called it “family get-together”.

To cope with the difficulties and challenges, most people tried to develop some strategies which helped them go through this period. The coping strategies can be grouped into four categories: doing exercises, meditation, getting a new hobby and creating a new daily routine or sticking to the previous one even more. Exercises could be doing yoga but biking or walking were also often mentioned (which was a given for many instead of using public transport). Meditation referred to any activities which helped one to relax (having more “me-time”). Among the new hobbies we could find cooking, gardening and other activities related to the house. Daily routine refers to imitating the office atmosphere, preparing a weekly schedule, being more with the dog as a relaxation etc.

Both the perception of being quarantined and the coping strategies were various, but it is clear that (increasing the amount of) telework – under normal circumstances – can be beneficial not only to the environment but to the individuals as well. 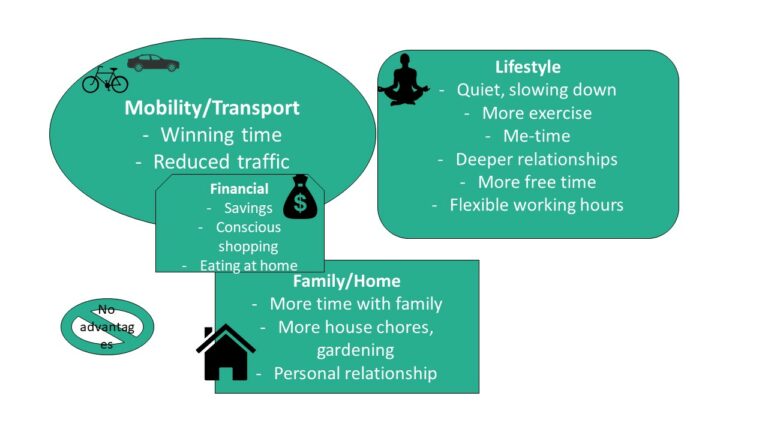 We use cookies on our website to give you the most relevant experience by remembering your preferences and repeat visits. By clicking “Accept”, you consent to the use of cookies. The selection of necessary and optional cookies can be changed via the settings.
Cookie settingsACCEPT
Manage consent

This website uses cookies to improve your experience while you navigate through the website. Out of these, the cookies that are categorized as necessary are stored on your browser as they are essential for the working of basic functionalities of the website. We also use third-party cookies that help us analyze and understand how you use this website. These cookies will be stored in your browser only with your consent. You also have the option to opt-out of these cookies. But opting out of some of these cookies may affect your browsing experience.
Necessary Always Enabled
Necessary cookies are absolutely essential for the website to function properly. This category only includes cookies that ensures basic functionalities and security features of the website. These cookies do not store any personal information.
Non-necessary
Any cookies that may not be particularly necessary for the website to function and is used specifically to collect user personal data via analytics, ads, other embedded contents are termed as non-necessary cookies. It is mandatory to procure user consent prior to running these cookies on your website.
SAVE & ACCEPT